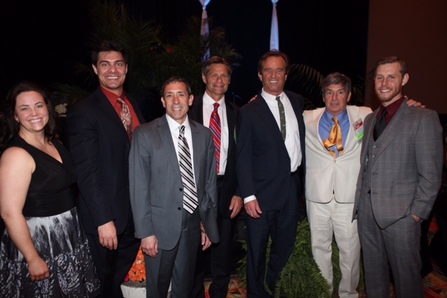 The law firm of Arthur, O’Neil, Mertz, Michel & Brown posed with Robert Kennedy, as they celebrated Dan Michel’s new leadership role as President of the Ohio Association for Justice.

At its annual convention, May 7-9 in Columbus, Ohio, the membership of the Ohio Association for Justice will elect by acclimation Daniel R. Michel to be President-Elect of the organization for the coming year. Michel is a member of the organization’s Executive Committee, and the previous year as President-Elect and has served as Vice-President, Treasurer and Secretary.

The Ohio Association for Justice is a statewide organization of plaintiff attorneys whose mission is to preserve our Constitutional rights and protect access to the civil justice system for all Ohioans through advocacy in the Courthouse, Statehouse, and Bureau of Workers’ Compensation. Member lawyers practice in such specialty areas as workers’ compensation, personal injury, medical negligence, products liability, consumer law, insurance law, employment and civil rights law, environmental law, and general negligence.